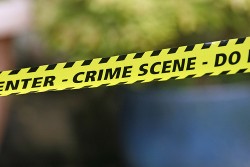 A homeless man named Hugo Alfredo Tale-Yax interfered with an attempted robbery by defending a woman on the street. The would-be robber stabbed Tale-Yax and ran. A bleeding Tale-Yax stumbled and fell onto the sidewalk. The New York Post got the tape from a nearby surveillance camera; its time-lapse video is beyond disheartening. Over the course of more than an hour, almost 25 people walked right past Tale-Yax on the sidewalk without doing anything to make sure he was alright. When firefighters arrived an hour and 20 minutes after the stabbing, Tale-Yax, just 31-years-old, was dead. (by JosieRaymond)   READ MORE

Thank you so much Josie for sharing this story of "the absent Samaritan"… it is horrible, it cuts deep… I'm thinking back on times I choose not to get  involved… even times I read stories like this and did not even do the minimum – write back in response…
After reading this Heri came to mind almost immediately, he is one of my hero's from the Rwandan genocide  who said "…it was harder to leave than to stay and help.".  Something I will never forget. He had been the night watchman at a small orphanage with 30 kids age 5 and under who lived 3 house down from  us in Kigali.  The couple in charge of the orphanage fled with the other foreigners when the genocide exploded but Heri stepped up, took the reins, and with incredible courage and diplomacy along with 2 or 3 other ladies  masterfully cared for those 30 little ones during the 88 days of slaughter.
But one day after who knows how many sleepless nights, after being robbed over and over (the killers stole the kids food and even clothing) and after having his and the kids lives threatened constantly, Heri started to walk away…. who could blame him?
Thats when he said, “With every step I took away from the orphanage I began to realize that it was harder to leave than to stay and help. I turned around and went back”
So I think if Heri were writing  in response to this tragedy, he might say something like, “Hey,  it's harder to walk by than to help, turn around go back.”
We have cell phones that make it so easy, we have Good Samaritan laws that encourage doing the right thing, do we have the heart?
Thank you  Hugo Alfredo Tale-Yax….oh…… Thank you for your courage, for risking and then losing your life for a stranger… maybe you thought of her as a sister… maybe it was just your 'way of life'. She woke up this morning because of you, and we step out today, strengthened because of you.  To family and friends of Hugo, we're sorry we weren't there…  we're so sorry that those of us who were there turned away… please forgive us…
Thank you Josie for what you are doing.  Carl and Teresa

We had a great visit with the students at White Shield!  Carl was able to speak to students from the high school […]